Lisa Großkopf (AT) and Shiri Rozenberg (IL) transform the project space of philomena+ into a temporary photo studio.
According to the artists, photo studios are spaces in which normative structures of our society, in particular in terms of gender, sexuality and body, become visible in a more compact form. In the displays, the highlights of the (heterosexual) family biography are often presented. At the same time, one often encounters stereotypical depictions of feminity and masculinity regarding the subjects shown, poses, facial expressions, image composition, etc.
The Fotostudio Großkopf & Rozenberg in the Heinestraße is considered as ’safe space‘ where everyone is welcome and normative structures will be demolished. 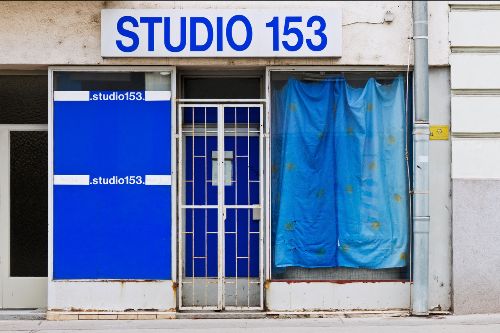 Lisa Großkopf (AT)
Lisa Großkopf’s work oscillates between different disciplines, from photography to transmediale art. In her artistic practice and investigation she combines conceptual, experimental and performative methods with practices of activism. A recurrent theme in her work is connected with the tension between private and public spaces. Since 2016 Lisa Großkopf has been transforming windows of vacant shops into displays of fictional photo studios in order to question norm structures of our society through artistic intervention. Lisa Großkopf studied photography and visual communication at the University of Art in Linz as well as TransArts at the University of Applied Art in Vienna.
https://www.lisagrosskopf.net/ 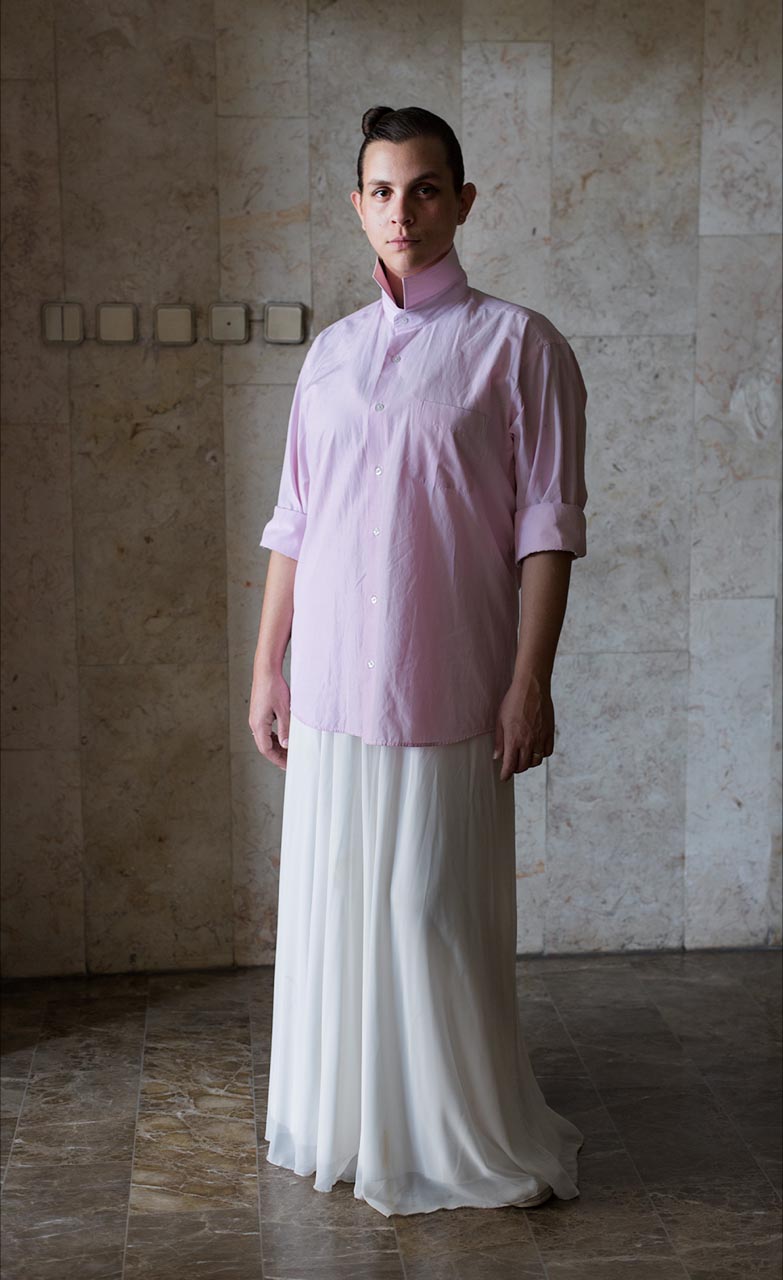 Shiri Rozenberg (IL)
Shiri Rozenberg is a photographer and a conceptual artist working with photography and installation. She received her BFA in photography and her MFA both from the Bezalel Academy of Arts and Design, Jerusalem, Israel. Her point of view raises questions about her environment, as she brings up different conflicts between cultures, nationalities, sexuality and gender. She seeks to re-assimilate within a place and to create a new narrative through this assimilation in which she chooses its boundaries or alternately breaks them.
https://www.shirirozenberg.com/

The duo show entitled << Befindlichkeiten مزاج >> deals with the emotional state of individuals as well as of different societies.
Nabil Saouabi and Thaer Maarouf work in a multidisciplinary manner, but both show a striking affinity to figurative painting.
Nabil Saouabi (artist-in-residence) holds a doctorate in art theory and teaches at the Academy of Fine Arts in Tunis. Through his artistic work he examines the impact of the image on the human psyche in the fluent transition between reality and fiction. He makes use of different image sources, such as from the press, the internet or classical films. Painterly reinterpreted, they allow current socio-political conclusions.
Thaer Maarouf, who was born the same year as Nabil Saouabi, is from Syria. Since 2015 he has been living and working in Austria. His multifaceted oeuvre has been shown at international exhibitions and art fairs. Thaer Maarouf is known for his use of symbolism, which focuses on human rights issues in the Middle East and on the living conditions of displaced peoples. Currently it is above all the self-portrait that assists him to transport questions about existence and state of mind.

The exhibition How is life? Chetori? چطوری؟ aimes to explore the area of ​​conflict between artists living in Iran and emigrating from Iran. Based on the selected artists from Iran, an art scene, mainly from Isfahan, will be presented. We will ask about the working condition for artists, important topics and which artistic narrations they need. Isfahan – Iran’s third largest city with about 2 million inhabitants – has a small art scene, an art school and a museum of contemporary art. In addition, an active gallery scene endeavors to provide better remuneration and exchange among the artists.

Ali Akbar Farzadi and Fariba Farghadani paint everyday scenes and symbols – the act of taking off the shoes in front of the house or the red cult car, the Méhari. In her poetic short films, Minoo Iranpour Mobarakeh describes the not always easy encounter between man and woman and, above all, reflects on the position of women in Iranian society. Mahroo Movahedi, born in Isfahan, lives in Switzerland, is researching in a long-term project on the Zayanderud, the river running through Isfahan, which is dry every two or three months due to diversions and congestion projects. Ramesch Daha, who emigrated to Vienna with her family, knows Iran as part of her family history. She does large-scale artistic research projects on historical and current events in Tehran.

An additional program accompanied the exhibition:
Thursday,  06/06/2019, 7 pm   Reading: Nava Ebrahimi, author from Graz with Iranian roots, reads from her book, „Sechzehn Wörter“ (2017), in which she presents a narrative of 16 terms that play a role in Iranian everyday life.
Thursday,  27/06/2019, 7 pm     Expert Talk: Art historian and co-founder of philomena+ Negar Hakim talks about contemporary architecture and buildings in her birthplace Isfahan. Picnic with Iranian food in the front garden of philomena+.

A man is lying on a bed without moving. The position of his body suggests no action by maintaining an immobile posture as if he is dead; it feels like the body will remain completely still. The positioning of his hands raises a suspicion; it is not clear for the viewer whether it was staged to manipulate how the body must be seen and experienced. Nevertheless, the same body posture also stimulates a scene of sleep. Therefore, the photograph creates a tidal situation between life and death.
Each photograph in the Someone Has Been Sleeping in My Bed series displays the same body in distinctly different interior settings that have their unique style, character, theme, fashion, and atmosphere.
Someone Has Been Sleeping in My Bed designates a binary orientation in line with the contemporary discourse of photography: on the one hand, each photograph focuses on visible reality, yet on the other hand, it relates to its photographic trace to various interpretative fields, rooted in pre-existing connotations. Therefore, these photographs question our perception of reality and the medium itself by creating another layer of complexity of vision and gaze on space, time and perspective.

These works reflect the artistic spirit of an architect who is not always able to find a suitable canvas for his pictorial creations solely through the design of the architectural space. They are the expression of ideas that were often completely improvised in the artist’s mind and subsequently put on paper using a fountain pen. The concept of these works is based, on the one hand, on capturing the composing of form and, on the other hand, on the optical perception of space with regard to visual aspects. These drawings are the result of a search for complex structures created through lines and aim to deliver a new representation of a three-dimensional Form-Space on a two-dimensional image area.

philomena+ presents the exhibition „Carrefour des possibles“ with Yesmine Ben Khelil and Lisl Ponger who both question clichés and take a critical view on our capitalist society. Lisl Ponger translates a 17th century Spanish still-life into a contemporary photography in a neoliberal, postcolonial and globalized setting. Yesmine Ben Khelil tells through her work Tunisian stories connecting the past, present and the future and oscillates between reality and fiction.

In spring and summer 2018 philomena+ realizes a series of artistic interventions at the Vienna Praterstern.
The exhibition at philomena+ project room offers a preview of the site-specifically conceived projects which aim to make utopias and dreams at an inhospitable place true, even if it’s just for a short period of time.

Mohammed Laouli creates with the video << Hassad al Houb / Labor of Love >> an interface between the arduous work of Moroccan women in the production of rose water and a text of the feminist activist Sylvia Federici. In the artist’s work, we see a ritual in which a miraculous rose water is produced that symbolizes a cure against patriarchal, sexist, and capitalist thinking. This water, presented in little flacons in philomena+ showcases, is intended to release the viewer from these thoughts.

Mohammed Laouli was born in 1977 in Salé, Morocco, where he still lives and works today. He studied philosophy in Rabat. His artistic work focusses on social marginalized groups and has received high recognition in the international arena.

<< Attokoussy >> is the Arabic epitome for practices and rituals of faith. The art project with the same title is a collaboration between the independent art space Le Cube in Rabat and Hinterland Gallery in Vienna. It deals with the so often ethnically and archaically connoted theme by the use of new artistic approaches. In September 2017 an artist residence programme in Marrakesh, organised by Le Cube, gave the opportunity to several artists from Morocco, Austria and Australia to confront the local practices of faith and to transform these experiences into and drawings where the past and the present merge with each other. One of them is the video work << Hassad al Houb / Labor of Love >> by Mohammed Laouli.

The entire exhibition «Attokoussy» in the Galerie Hinterland, Krongasse 20, 1050 Vienna will stay open until Dec. 23rd, 2017.

Attokoussy is part of the Vienna Art Week 2017.

In a world, where the impossible seems possible, when something that has been repressed for a long time, steps out of the unconscious and seems to get radicalised through the extreme right, artists are more than ever prompted to dedicate themselves to a future, where anti-intellectualism is at stake and critical thinking no longer accepted. What will come after Trump, Brexit and ISIS? Which forms of radicalisation are constituted and how has our perspective on a liberal, open society changed? How can artists reclaim this open society and which conflicts arise along economic, technological and medical progress, which makes us want to live longer but prevents us from thinking critically?

Artists are in constant need of demanding new models of gauging how the world can be seen from a different perspective than the one, which is determined, by dominant models of power, politics or religious beliefs. The latter often cause unexpected turns that shift societies into different directions, which might not even be accepted by a majority of voters and/or the population. Ever again, societies and certain population groups are trapped in a “state of exception”, as Giorgio Agamben put it in 2005. This state of exception, however, has continued to the present day and rather turned into a “state of emergency, which might not be overcome in a near future.

The artists whom are taking part in the exhibition tackle these questions implicitly and try to generate various models, which claim for a different status quo to open up new possibilities and areas of thought at the prelude to further urgent hopeless transformations and the voids that carry certain disappearances within unexpected turns.

Algerian Arabic for „those who burn“ (the frontiers).
Harragas are persons who run ashore.

The Arab Revolution held much promise. Anger at the old regime and a burning desire for political and social change caused the people to rebel. The revolution opened up possibilities and inspired new beginnings far beyond the borders. These political transformations have also caused a ‘turn’ in local art practices. Artists began to intervene in their own way and to become more vigorous participants in civil society. On the occasion of the 5 years-anniversary of the revolution, the Kunstraum Niederoesterreich and Public Art Lower Austria were presenting interventions by artists from the MENA region (Middle East and North Africa) as well as Austria. All of the projects took place in urban and rural public spaces in Tunisia and express the hopes and difficulties of the democratization process. For THE TURN المنعرج, the curators Christine Bruckbauer and Patricia K.Triki faced the challenge of presenting works initially not only intended for the public space but also participatory and process-oriented in the Kunstraum Niederoesterreich. There a number of questions arise: What remains? Can we measure the effectiveness of these projects in which international artists also took part and which were largely funded by foreign institutions? What is the role of art in times of transformation?

The conference THE TURN المنعرج on March 18 in the Kunstraum Niederoesterreich was a chance to explore these issues and other crucial questions in comprehensive discussions with artists, civilians who participated in the projects, art historians, and representatives of funding institutions from Tunisia, Egypt, Libya, Syria, Germany and Austria.